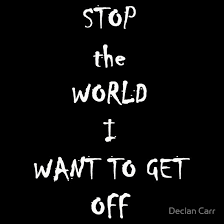 As we enter the Arab Winter, I am suffering threat fatigue.

Much of the news coverage this week, as it is every week, had to do with one or more awful set of occurrences taking place in a part of the world that is never going to wind up on anyone’s list of places to visit before they die.  That these arid expanses of rocks and sand are labeled ‘countries’ is only relevant if you happen to be a geography student.  The only reason the average American knows the names of these places is because oil is buried under their rocks and sand.  Oh, and the fact that they are on the news every night burning flags, and terrorizing people from the non-rock and sand countries.

Then there is the snit about the movie.  Washington had to undergo a factadectomy.  There is proof that the release of the movie had nothing to do with the recent riots and killings.  The attack on our embassy was planned.  Even so, the government of the United States kicked off their 2012 apology and appeasement tour with their own video featuring the two most powerful people in the world apologizing for the movie, and imploring the dirt agrarians to forgive us.  As a sign of US sincerity, the president and his secretary of state beseech those we offended to agree to accept our billions of largess.

Millions of people are upset because of the movie.  Just in case some of those millions did not finish unleashing their angst burning cars and firing rockets into buildings—destroying the few capital assets they had, the Pakistani president, the purveyor of their fiscalamity, decided to legitimize the anger of the thugocracy, set aside an entire day for them to vent, and provide them with a venting venue.

Net-net on the holiday, 15 less potential combatants.  Not much of a holiday if you ask me—it makes Arbor Day look better and better.

And guess what?  The news media captured the whole thing for our education and entertainment; lucky us.  How about we agree not to watch any more shockumentaries disguised as ‘news’, especially if the whole reason the newsmakers are making news is to export their acts of terrorism to US television.  When something you expect to happen happens, is it news, or is it simply the new normal?  Reporting a suicide bomber blew himself up somewhere in the Middle East is the new normal.  The Talibanisation of millions via franchise terrorism has become their daily equilibrium.  Free-range terrorist events in the name of whoever, are no more newsworthy than reporting that it did not snow in Miami in July.

Is it more difficult to make this argument in America than would be to make it to the jihadists?  Would not the jihadists agree with most of this?  They have no need for political correctness.  America’s leadership however, feels their pain, and has a burning desire to assuage their angst.  At least that is the message we are sending.  Are we no longer capable of acting like the world’s most powerful democracy?  Our aircraft carriers against their rocks and goats.  Yet the goat people are the ones dictating our policy.

The United States of America versus the Sharia States of the Middle East.  At the moment we seem to be trailing badly at halftime in the Afghani game of Bazkashi, and the reason we are trailing is that we are being used as the headless goat.

The torch-and-pitchfork crowd flaunts the fact that they do not value life, theirs or others.  Is it not incongruous for them to feign worship of a god who created life only so they could give up their own lives and take the lives of others so cavalierly?  They deploy Son of Sam logic to show their rectitude by attributing their actions to some facsimile of a higher power.  They have behaved this way ever since the media first showed a willingness to broadcast their message.

So what options does that leave us with our flat screen televisions during the dinner hour?  How about more coverage of Canada, heh? Or a tulip festival in Holland?  Perhaps a cooking segment on how to prepare Feijoada, Brazil’s national dish.

Could much of the problem be solved if the news media were not so quick to validate the verisimilitude of other religions? Certainly there is more to it than that.  However, as the media demonstrates daily, it is difficult to be both politically correct and to run non-stop coverage of deplorable people doing deplorable things in the name of their god.  If one thing is incongruous with another, is the incongruence because of the falsehood of one?  If A implies B, and A is false, what does that say about B?

“Yeah though I walk through the valley of the shadow death” has a new reality.  A battlefield for some, a necropolis for others.  Shoeicide.  And while the bombings continue our leaders are friending the terrorists on Facebook.

Personally, I like believing in a god whose godness is not dependent on my ability to defend Him.  A life over death, heaven and earth making god.  A god omnipotent enough to overcome a caricature or a movie.  Our constitution supports the right of people to worship whatever mythology happens to tickle their fancy, no matter how obtuse the belief.  The Constitution does not decree that those who believe in the one true god have to subordinate their beliefs because their very existence offends those who place higher value in a turnip.

Washington wants us to make nice with the vicars of the Polemic Turnip, suggesting we hold hands and accept everyone for who they are.  Our leaders would have us renounce our values and beliefs and on bended knee hope the fifth column agrees to meet us halfway.  Clinton even suggested we build a Walmart in Libya.  That way the people who hate us could buy camouflage clothing at a discount before they blow themselves up.

Give a little and hope they like us.  I think not.