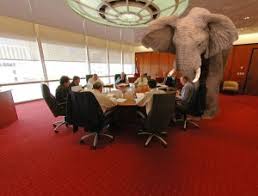 For those of you who can find California on the map, you will recall the great turnip boycott of the nineteen seventies—I know they boycotted grapes, but I like grapes and do not like turnip, so I choose to have my own protest.  Anyway, this boycott worked, and as a result, the working conditions for migrant workers improved albeit only modestly.

They say it cannot be done, so let us show them.  The one thing that would get companies to embrace social media quickly and unashamedly would be if there was one less company.

Companies are wrong about those three assumptions and the use of social media can and will prove this.  I would ask for a company to volunteer, but that would take too long.

If ABC, CBS, and NBC were able through their coverage of the grape boycott, bring about change to an entire industry, imagine with me what impact a global, committed bunch of savvy social media users could do to a single firm.

Here is what I propose.  Let us pick one firm.  The characteristics of this firm should be that it is well known and not well liked—this way if it self-destructs we can argue that we acted on behalf of a greater good.  It should also be a firm associated with technology, a firm that ought to at least be able to spell social media.  If I were asked which firm I would choose I would pick a firm in some aspect of telecommunications, say a firm like Comcast or Verizon—an easy target, a firm facing a customer experience war armed only with their CRM.

Now, the idea of our little social project will be to provide a heads-up to all of the other companies about the start date of the importance of social media.  Let’s tentatively agree on starting on the first of November unless there is a game on television I want to watch.

The goal of the project is to demonstrate that the bourgeois, the working class, with its harmless set of social media tools, can create affect enough of a disruption to an organization to make that organization sit up and take notice, or to make it disappear.

I think the end result of such an effort would have a significant impact.  The impact could easily bring about more fundamental change about how firms use social media than was brought about by the grape boycott.

Sometimes something has to be sacrificed on behalf of the greater good.  Although a rising tide lifts all boats, it can ruin your day if your firm is the one chained to the pier.