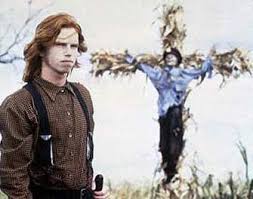 Not in the Stephen King way.  During the late fall, my middle school friends and I would play among the withered corn stalks; capture the flag, building forts, and on occasion being more adventuresome.  On those more adventuresome occasions the adventure included matches.

It went something like this.  We would stand among the seven or eight foot tall sepia colored stalks, and remove several ears of corn, corn that had been allowed to dry on the husk.  We would peal back the leaves on husk, and strip the kernels from the bottom two-thirds of the husk.  The end product would look similar to a WW II German hand grenade—the stripped husk became the handle, the kernels on the top third were the “explosive” part, and provided the weight needed to make the grenade travel when thrown, and the dried leaves were the fuse.

The leaves were lit, closed our eyes, and let it fly.  Then we would rush through the stalks looking for signs of smoke.  By necessity, we were in a hurry.  The object of the game was to locate the grenade among the hundreds of corn stalks before it set the field on fire.  We were successful every time but one—must have been a pretty good throw.

I remember my mother asking me why my corduroy jacket smelled of smoke.  I didn’t have the courage to tell her it was because we were using our jackets to try to beat out the flaming stalks.

If anything can be stated with certainty it is the following; it will cost much more to revise a failed EHR implementation than whatever incentive money may have been received had it worked.  Speed is costly.  So is putting in an EHR that does not do what you need it to do.  There are no business benefits to getting the EHR box on your to-do-list “checked.”

When your haste to implement EHR causes you to fail to meet Meaningful Use, how will you explain to your mother why your jacket smells like smoke?