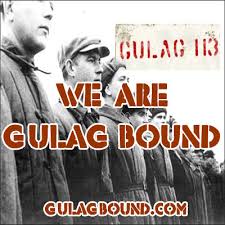 Were one to judge America by what they read from scanning the headlines of the magazines in the supermarket’s checkout lane, the only items of note are that Jennifer Aniston may or may not be pregnant, and that another one of the Kardashian’s was getting married—no word as to whether or not she is pregnant.  The headlines provided no indication that we are at war or that the economy has been outpaced by my daughter’s lemonade stand.

Anyway.  I have been reading Solzhenitsyn’s The Gulag Archipelago, which should be on every reading list for Genocide 101.  In the book he describes numerous offenses which could get a Russian sentenced to Stalin’s gulags.  Some estimates suggest more than sixteen million people were purged under Stalin’s regime—enough people whereby those in power had to continuously invent new offenses.

In one such description Solzhenitsyn recounts a conference for Stalin’s supporters.  Every public gathering was attended by several members of the NKVD, the bad guys.  At the conclusion of the conference its chairman called for a verbal salute to Stalin which resulted in all of those attending applauding.  The vigorous applause continued for eleven minutes because everyone was afraid to be the first to stop applauding.

To stop applauding was to show initiative, was to be an individual.  Exhausted, the chairman finally stopped clapping; immediately, so did everyone else.  The chairman, a loyal communist, was arrested.  During his interrogation the interrogator told him “Don’t ever be the first to stop applauding.”  Darwin’s natural selection, and how to grind people down with stupidity.

Nonetheless, we return to Beaver Cleaverville.

Do you ever sit in a meeting thinking it would be easier to design a revolving sliding door than to agree with or understand whatever is going on in the meeting around you?  You scan the room eying the flock of sheep each of who think of themselves as lions.  Once again, the Pickle Factory’s leader had confused motion with movement.  You scribble yourself a note using your favorite crayon—the cerulean blue, ‘I have seen our future and it needs work.’

“Well, here we are,” says the moderator outfitted in her J C Penney imitation Vera Wang pantsuit.  For years her mind had run just fast enough to enable her thoughts to always be in the same place.

“Yeah, here is where we are,” you mumble into your cupped hand. “We have been here before and we will be here again and again.”  The person across from you seems to be humming “It’s a long way to Tipperary.”

These meetings make about as much sense to you as the game the Afghan Pashtun tribesmen play—buzkashi—sort of like polo except instead of using a ball they use a headless goat.  The executives rampage through the offices each day dragging the headless carcass of their business strategy to meeting after meeting hoping to score, and the more meetings you attend the more you feel like the goat.

“What are we supposed to accomplish today?” You ask.

“Your guess is as good as mine,” replies the moderator, her mind making its way back from its visit to the land of ultima Thule.

“No, your guess is better than mine,” you say.  “It is your meeting.”  ‘Lock the gate,’ you are thinking, ‘before the village loses its idiot.’  Everything is running behind and the team wants to make up for lost time.  Your job is to try to convince them that you cannot make up for lost time; the best you can hope for is not to lose any more.

You have always known that companies which do not tolerate dissent have a tendency to ignore dissenting information but they remember the dissenters—the first person to stop clapping. In a company lacking second sight and new ideas, the old ideas are often divided evenly among the employees.  The death spiral of silence—people avoiding threats of being voted off the island have a tendency to refrain from making any statement that may show them to have an original thought.  Showing initiative can result in your being sent to the company’s gulag.

Have you noticed that the more a firm’s competitive edge erodes, the busier the firm appears to be?  Once you have fallen through the looking glass the only way out may be for you to walk back the cat, that is travel backwards to see how it is you and the others became trapped in this house of mirrors.  The problem with that strategy is that to undertake it requires you to show initiative.

The firm’s gulag is filled with people like you.  At least when you get there you will be able to commiserate with people of a similar ilk.