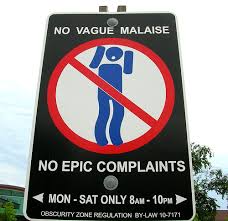 It ain’t easy always being the one dumb enough to write the words on which others dread to tread.  “Get Paul to write it.”

A lot of companies need to go to the doctor.  Whether the firm suffers from malaise, ADHD, or depression is not really important.  Companies do not get ill, companies do not suffer.  Their employees do, get ill that is; companies merely serve as incubators of the malaise and facilitate it.

We have all seen it.  Remember Sally?  Her office was the down the hall, third door on the left.  Crayon drawings from her granddaughter hung from her credenza.  An imitation Tiffany desk lamp with a cracked shade was to the left of her monitor, and a half-dead philodendron in a clay pot grew through the slats of the Venetian blind.

Sally was always the first one in the office.  She was the person who cleaned the coffee pot and made the first pot of the day.  She filled her ceramic mug, the same one she had used for twelve years and using her pinkie finger like a swizzle stick stirred in two packets of artificial sweetener.

Sally was let go, was downsized, was laid off, was fired.  Some guy named Bob now sits in Sally’s office.  It will never be Bob’s office.  Today it is as though Sally never even existed.  Her perfume no longer drifts down the hall.  Bob let the philodendron die.  The drawings are long gone along with the imitation Tiffany lamp with the cracked shade.

If you are the first one in the office you stand in the snack room trying to figure out who is going to clean the coffee pot.  Rather than cleaning it yourself, you have learned to make do with a cup of some sort of chamomile tea that smells of lavender.  You no longer know whose birthday it is or who just had a baby.

The company has changed and everybody went along with it.  First Sally, then Mr. Withers who worked in tax.  Two people in purchasing left on the same day.  It feels like there should have been a wake for them or like you should be wearing a black arm band.  You cannot remember the last time anyone went to lunch together.  You have seen the malaise and the malaise is you and him and her.

Companies spend millions of dollars trying to figure out how to boost earnings per share, how to improve productivity, or customer satisfaction.  They hire firms like BCG and Bain thinking maybe the answers are buried in the two hundred thousand dollar white paper they never read or in the multi-million dollar supply chain project or the hundred million dollar electronic health records system.  The end result—mistakes are made faster because they have been automated.  During the process of automation, more people along with their half-dead philodendrons were voted off the island.

It is as though those people never existed.  The only difference between those who never existed and those they left behind is that those left behind have not yet figured out that they never did exist.  To many companies the people are not any more real than the laptops, and perhaps less valued.  Inventory: 35 accountants, 72 programmers, twelve hundred laptops, and six half-dead philodendrons.

One need not hire BCG or Bain to recognize the problem.  Look at the condition of the coffee pot sitting on the warm burner.  Look at the months of undelivered reports that are stacked outside of Sally’s office.  Look at the faces of those in the meeting with you or those who reluctantly came to the holiday party because they thought their boss was making a mental note of who did not attend.

Too many companies treat their employees as disposable and replaceable assets.  Customers will never see nor will they interact with the data warehouse.  They will assess the company based on their interactions with the employees; the receptionist, the person on the phone—the one paid the least, the one coached to smile while they talk, the one coached to get the customer off the phone as quickly as possible so they can get the next person in the queue off the phone as fast as possible.

These people did not break the company; the company broke the people.  The company created and sustained an environment of malaise and only the company can fix it.  The malaise will not improve by implementing casual Tuesdays, or by placing an employee suggestion box in the cafeteria.

Employees are a lot like customers—they are smart and they want to feel valued.  Wanna bet that there is a high correlation between customer satisfaction and employee retention?  If companies want their employees to instill an attitude in their employees such that the employees would be willing to die for the company, the first thing the company needs to do is to stop killing them.