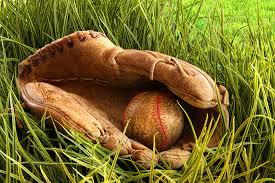 The other night as I’m sitting on a hard bleacher watching my seven-year-olds baseball practice I noticed the mom sitting next to me looking a little forlorn. Being naturally inquisitive, I asked if everything was okay.

“I lost his glove,” she replied.

Noticing a glove on her son’s hand, she saw my look of confusion. “Not his. My husband’s. I had it with me last Thursday, and I left it here.”

“I don’t suppose this was a new glove. Judging by the look on your face I’d say this was his favorite glove, and was probably handed down from his father. Autographed by Mantle and Maris in 1961.  Fifty years old, supple, broken in, fold flat as a sheet of paper.”

“Fifty-five years,” she corrected as she lowered her eyes.

“It’s rained the last three days,” I told her, which caused her to grimace even more. Having nothing better to do, I flayed her emotions. “I bet that glove meant the world to him. He probably planned on giving it to your son in a few years. The glove probably reminds him of the big events in his life, every scar, each stain on the leather, points to something important. You know, if it was outside for a few days, the field mice will have chewed on the leather.”

She brushed away a tear, and headed to the lost and found.

“Any luck?” I asked when she returned.  She shook her head in despair. “In some countries, if a wife does something life that, the husband can sever the relationship, literally,” I said as I made a slashing motion with my hand. She made the briefest of smiles. At least she knew I was pulling her lariat. Reeling her in, I continued.

“You’re not thinking of spending the night at home, are you? If you are, you should at least call someone and let them know of your plans. He’ll heal over time,” I told her. “But he won’t forget it. Twenty years from now the two of you will be watching something on TV, and something will remind him of the glove YOU lost.”

Fast forward to last Wednesday night. My daughter and I are getting out of the car so I can coach her and her softball team in the playoff game.

“Is your glove in the trunk?” I asked. This is after I spent several minutes grilling her at home about whether she had everything she needed for her game.

“I hope so,” she said shamelessly as I popped the trunk for her. “You hope so?” I repeated with an edge in my voice.

“It’s not here Daddy,” she said as she searched the trunk.

I left her with her friends and drove home to look for it. Ten minutes. Nothing. For some reason, I looked in the trunk. There it was. Death by 1,000 cuts.

Does it all come down to baseball gloves?  “I hope so.”  What kind of a response is that?

Will these EHR expenditures improve our operations? I hope so.

Can you confirm for me that Patient Experience Management won’t fall any further? I hope so.

Are we ready for the reform changes coming to the business model?  I hope so.

Will we meet Meaningful Use? I hope so.

Do you think we should continue to employ you? I hope so.